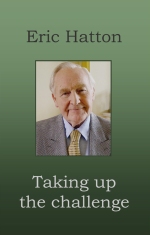 The long-awaited memoirs of Spiritualism’s most respected ambassador have been published.

Taking up the challenge was launched on December 30 at Stourbridge National Spiritualist Church, of which its author Eric Hatton has been president for five decades. Church members, Spiritualists from further afield and representatives of the local and Spiritualist press joined Eric’s family and friends as copies of the book were unveiled and Eric settled down to sign well over a hundred of them.

The book chronicles over 60 years at the heart of Spiritualism and contains its author’s experiences of sharing a platform with most of the celebrated mediums who were active during that period, including Gordon Higginson, Harry Edwards, Walter Brooks, Albert Best, Doris Collins, Doris Stokes and Sally Ferguson, to name just a few.

Eric Hatton signs a copy for medium Gerard Smith, one of the book's dedicatees

Also included is a dramatic account of one of Eric’s sittings with the legendary Welsh materialisation medium Alec Harris, in which he describes the privilege and sense of wonder he felt in witnessing fully-formed materialised spirit people embracing and conversing with their earthly loved ones in well-lit conditions. “Such profoundly touching reunions were almost beyond belief,” he writes, “yet they happened, providing healing balm to the souls of those who had loved and lost and found again.”

Eric attaches great importance to properly conducted psychical research, and a chapter of the book is devoted to the subject. It includes accounts of a number of experiments devised by Eric himself with the intention of discovering more about the mechanics of mediumship and validating information supplied through individual mediums.

“Throughout my life in Spiritualism I have always been at pains to verify information given to me through mediums,” he explains, “even those who have been known to me personally. It is vitally important that communications purporting to come from the spirit world should be treated objectively, and their veracity established.”

The book also offers insights into the inner workings of the Spiritualists’ National Union, with which Eric has been associated for more than 60 years, and for the first time makes public the events relating to the end of his own presidency.

Taking up the challenge is a must-read for all who have an interest in Spiritualism, its phenomena and philosophy, presented by one of the most credible and respected Spiritualists of our time. As Maurice Barbanell’s former assistant editor Roy Stemman writes in his foreword to the book: “Careful, cautious and considered, [Eric] would be the perfect witness in a court of law.”

Perhaps the most striking thread running through the book is Eric’s modest and open-minded approach to what by any standards have been some outstanding experiences. He makes no great claims for what he has witnessed, simply setting out the facts and expressing how fortunate he has felt in having the experiences that have come his way.

In an afterword to the book, he writes: “I have tried to show, from my humble beginnings, a little of my sense of uncertainty in interpreting and expressing the ultimate purpose of the wonders I have experienced, but also at the same time to record my thanks to the Eternal Spirit, whom we call God, for granting me these priceless gifts of experience and revelation. Could it be that in bearing witness to these wonders I have but touched the fringe of his ways?”

Taking up the challenge is published by Saturday Night Press, priced at £10.50, and is available through the Spirit of PN Amazon Store.