In this new series we focus on a thriving Spiritualist church or centre, take a look at the people who run it, the programme it offers, and try to discover what makes it a success. This month, Sue Farrow puts the spotlight on Bournemouth Spiritualist Church, in Dorset.

In the coastal town of Bournemouth, nestled in a peaceful garden on Bath Street, sits Bournemouth Spiritualist Church. Three times voted SNU Church of the Year, it traces its beginnings to 1904, when trance and physical medium John Walker decided to start a development circle. One night, a spirit communicator came through and told the group that they were to help lay the foundations for a new church. Early meetings were held in what is now a local post office, and from 1905 services were held in a café. Thereafter, a number of venues were used, until the first Bath Street church was opened in 1924 and dedicated by the legendary Ernest Oaten, then editor of Two Worlds.

The church is now under the leadership of Al Potts who, with his twin brother Geoff, has been associated with it for more than twenty-five years, fourteen of those as president and vice-president, respectively. They are supported by a hard-working and dedicated committee. Membership currently stands at 148, plus 48 associate members, making a total of 225. “We take on approximately three to six new members each month,” Al says, “but like most churches we win some and lose some. Our membership does stay pretty steady though.”

The church has long held a reputation for high standards of mediumship and addresses, but its work is about far more than that. A glance at its informative website http://www.bsnuc.co.uk/index2.htm reveals a lively and vibrant place, with a wide range of events and activities, both religious and social. Educating people about Spiritualism is an important part of its outreach, and five downloadable, myth-debunking leaflets – the brainchild of past members of the committee – are available for those who want to learn more.

The church also runs a Seekers Group which meets on Wednesday evenings, with the exception of the last Wednesday of each month, when there is an Open Platform. The Seekers Group is open to anyone who wishes to learn about Spiritualism, and Al describes it as “essentially similar to a Lyceum, with a different guest speaker each week”. Other nights of the week are spoken for too. “Our Monday evenings give us healthy debate,” Al explains, “when the speaker/demonstrator can answer questions from anyone in the congregation, preceded by an address, and followed by a demonstration of their mediumship.”

Bournemouth’s healing programme is equally active, under the leadership of Wendy Bennett, who has been a healer at the church for many years and took on the leadership around ten years ago. Healing sessions take place from Monday to Friday. Responsibly, the church’s website makes it clear that “spiritual healing is not done to replace the treatment provided by GPs or medical specialists, but is mainly aimed at augmenting other treatments,” and emphasises that healing is on offer to anyone who needs it, regardless of whether or not they have a connection with the church.

The church boasts a well-stocked library (over 400 volumes) available to all its members. It includes a wide range of material – biographies of Spiritualism’s best known mediums and historical figures, plus books on healing, philosophy, other religions, Silver Birch, White Eagle and other guides. Poetry is on offer, too, alongside the works of Arthur Findlay and other pioneers. The library also contains videos, and is open for an hour or two almost every day.

Private readings are available on the first and third Saturdays of every month and there are two mediums in attendance. No booking is required for these sittings. Al adds that “the church also offers private sittings on Monday mornings, for which visiting mediums from different areas are available. The cost of a reading is £12 for members and £15 for non-members.” 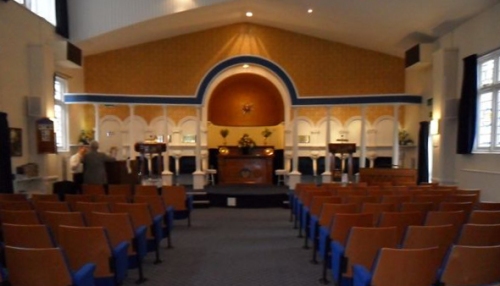 The interior of Bournemouth Spiritualist Church

There is also an active programme of social events at the church, an important part of building a strong, united church community. “We have concerts,” says Al, “our Christmas concert being a highlight of the year. We also have speakers from other religions, notably a Buddhist Lama from India. There is a film evening every month and we have evenings of mediumship and workshops with top mediums. Then there are coach trips, coffee mornings and fayres, and we are planning an Open Day around August, when we will have speakers/demonstrators, lectures and an organ recital, open to the general public. We also often host the SNU Southern District Council meetings, annual general meeting and so on.”

And what of connections with other local faith groups? “In general we have good relations with other religions,” says Al. “Seven years ago we were fortunate to host a service for Councillor Anne Rey, who at that time was a vice-president of the church, and Mayor of Bournemouth. Her first service was at Bournemouth’s mother church – St. Peter’s – and then the second at her own church. This was attended by Canon Jim Richardson, who at the time was Canon of St. Peter’s. It was a wonderful time for all of us. We have recently been approached to attend a meeting of other religions and will soon make arrangements to do so.”

Interaction with the local community is important to Bournemouth church, and includes healing, coffee mornings and sales of various kinds. “We have tried to secure a place for Spiritualism at the annual Remembrance Day service in the Bournemouth Gardens,” says Al. “But apart from seven years ago when I was the mayor’s chaplain and had an active role to play, we have been denied a place ever since.”

In recent years, the church has formed a twin relationship with the Church of Spiritual Awakening, in Kissimmee, near Orlando, Florida, and Al and Geoff recently spent several weeks there.

For both brothers it was a thoroughly positive and happy experience. “It was an opportunity to help raise funds for this small church,” Al explains. “We took three services, a workshop and evening of mediumship, plus a concert for their Valentine’s night. We also served Cassadaga, taking two morning services, two message services and a workshop. Our aim is always to raise money for the churches, and as usual we never take a fee. The money for the Cassadaga workshop was directed to the Church of Spiritual Awakening and helped towards the cost of their insurance for the year.”

Summing up his philosophy of running a Spiritualist church, Al says: “It’s to make it a place where everyone feels welcome. A peaceful yet vibrant place which concentrates on life, and not on death.”

Do you know of a church or centre – in the UK or elsewhere – that’s doing its job really well? If so, tell us about it. We’ll put a spotlight on it and get the word out there.