A very intriguing case of spirit return occurred in 1884. It concerned the after-death communication from two sons of a well-known citizen of Melbourne.

Details of what happened are contained in two letters, written on December 20, 1884, and March 21, 1885, by Hugh Junor Browne, the father of the two dead sons, published in The Harbinger of Light, the Victorian Spiritualist newspaper, and later further reviewed in Browne’s book A Rational Faith, published in 1892.

On Saturday December, 1884, shortly after 8pm, and despite their mother’s protests, Hugh Mackenzie Browne, 20, William McDonald Browne, 18, and a friend, Henry Murray, who was employed in Browne Senior’s distillery, set out to sail the yacht Iolanthe around Port Phillip Bay to Frankston and back by the morning of Monday December 15.

When they failed to return by Tuesday, the 16th, Browne, a committed Spiritualist, sought a sitting with George Spriggs, the Welsh medium, then residing in Melbourne.

Spriggs was unaware the young men were missing, and Browne made no reference to his concern for their welfare, mentioning only that his wife was unwell.

On entering a trance state, Spriggs immediately commented, “There seems to be sorrow and trouble connected with the sea,” and without stating to whom he was referring, he asked that something belonging to those of concern be given to him, and he would endeavour to trace them, using the art of psychometry.

On being handed Hugh and William’s wallets, Spriggs began to describe in detail the course of the yacht until it allegedly foundered on the Monday morning at 9 o’clock as a result of the “jib-halyard fouling in a squall”. The medium added that the yacht had sunk in deep water and would not be recovered.

Once out of the trance state, Spriggs was informed of the young men’s disappearance and agreed to sit again the next day, Wednesday  December 17, to see if further information could be obtained. At that sitting the medium was controlled by William, the younger of the two lads, who confirmed in every particular what had previously been said regarding the foundering of the yacht.

A further sitting was held the next day, when Hugh, the older son spoke, giving fuller particulars of the tragic mishap, as also did the other young man, Murray, who had accompanied the brothers.

Hugh Junor Browne then made every endeavour to obtain corroboration of the information received from the spirits of his two sons and their young companion, but without success. There had been no sighting of the missing yacht or the young men, and no wreckage or other evidence of misadventure had been discovered.

Then, two days later, on Saturday December 20, the body of the younger son, William Macdonald Browne, minus the right arm, was washed ashore near Picnic Point, about ten miles from Melbourne. The local newspaper, the Argus, records that an inquest, held on Tuesday December 23, 1884, established that the young man had drowned and the arm had evidently been taken off by a shark.

Shortly after, Browne received a letter from a Spiritualist friend in Adelaide, some 600 miles from Melbourne, claiming Hugh Mackenzie Browne, the elder son, had communicated with him clairaudiently and said that a large fish – unlike any shark he had ever seen – had bitten off part of his arm and clothing.

On Christmas Day a large shark was seen off the jetty at Frankston, 27 miles from Melbourne. After baiting, the shark was eventually caught shortly after 1am on Saturday December 27, 1884.

The large creature, measuring 14 feet, was undoubtedly what is known as a Great White Shark, a much feared predator with some 3,000 triangular, serrated, razor-sharp teeth, which bites its prey into large pieces, or swallows it whole.

On the Saturday afternoon, the shark was cut open, and in its stomach was found the lower part of a right arm – with hand complete; a coat, with wooden pipe and meerschaum stem in the pocket; a vest, having an old-fashioned gold watch attached to it by a chain; and pair of trousers, with a bunch of keys and 10s 6d in silver in the pocket. The watch was found to have stopped at nine o’clock, the exact time George Spriggs had stated nine days earlier that the yacht had floundered and the young men drowned.

Thomas Browne, an older brother of Hugh and William, identified both the clothes and watch as belonging to his brother Hugh. He gave an exact description of the watch before it was shown to him. A magisterial inquiry was held on Monday December 29, 1884, and rather ghoulishly the shark was brought to Melbourne by the man who had caught it, for viewing by the public.

What makes this case so interesting is that information regarding the accident, the drowning of the young men, and their subsequent mutilation by a shark, was provided by the two Browne brothers via two different mediums, neither of whom was aware of the other. The information was given from the spirit world before there was any evidence at all as to what had happened to these young men.

The information passed on by the two brothers was detailed and exact. Both were attacked by a shark, after drowning. One losing a right arm, with the rest of his body intact, the other leaving remains only of his right arm and items that conclusively identified him, found some seven days later.

The story of ‘The Great Shark Case’, as it became known, is a remarkable one, and presents us with firm evidence that life beyond death is a reality. Hugh Junor Browne’s sons came back after their physical deaths, not only to tell their parents how they died, but also to confirm to them that the belief in survival over death was the truth. 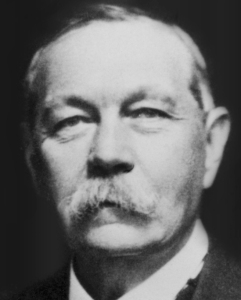 In 1921, Sir Arthur Conan Doyle made reference to the case in his book Wanderings of a Spiritualist, the record of his visit to Australia in 1920. In his view, the case “should have converted the city as surely as if an angel had walked down Collins Street”.

When introducing the story Doyle commented, “It only needs one single case of spirit return to be established, and there is no more to be said.” In other words, if there is one example of spirit return that can be verified, where there is no possibility of fraud, or misperception of the facts, no error in the recording of events, and no way by which the case can be said to be the result of telepathy or some other such means of information being given, then the case for survival of the human personality over physical death has been proved, and can no longer be denied.

In reality there are many cases that bear irrefutable testimony to spirit survival. However, ‘The Great Shark Case’ is arguably one of the most unusual and convincing.

6 responses to “The Great Shark Case”