March 31, 2011 was the 163rd anniversary of the beginnings of modern Spiritualism.  On this date in 1848, in a small cottage in Hydesville, New York State, the Fox family discovered that the rapping noises heard in their home were made by a dead pedlar. At first frightened by the rappings, Mr and Mrs Fox, their daughters, Margaretta (Maggie), and Catharine (Kate), and their neighbours, were soon convinced of the reality of the phenomena that made clear life continued after physical death, and that those in the spirit realms could communicate from beyond the grave. 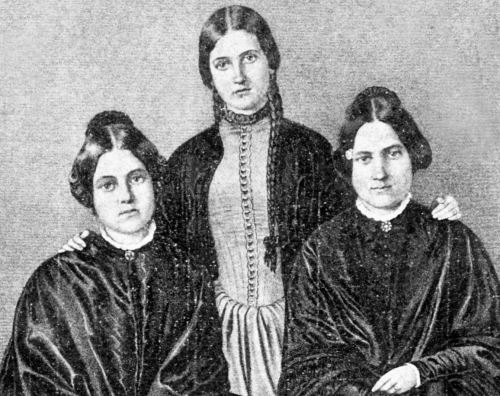 News of this astonishing revelation spread quickly, and the Fox sisters became widely known for their ability to make contact with the spirit world. Many others soon discovered that they, too, could talk to the spirits, and by 1850 the movement we now know as Spiritualism had come into being.

While researching this historic event I came across an article entitled The Fox Sisters: Some Unsolved Problems, published on June 24, 1943 in Light, the then weekly journal of Spiritualism. The article raised a number of issues. First, that there appeared to be no properly researched history of the Fox family. Attempts to establish where the Fox family had come from, or where the girls were born, had apparently failed. This seemed a great failure, given their importance in initiating spirit communication.

Second, there was uncertainty about the ages of the girls at the time of the events at Hydesville. Maggie may have been 15, 14, 13 or 12, and Kate 12, 11 or 9. The third issue of concern was whether there was any validity to Maggie and Kate’s confessions that what had occurred at Hydesville, and afterwards, had “been humbuggery from first to last” and “an absolute falsehood”. It was noted that these admissions led to the publication in 1888 of A Death Blow to Spiritualism by Reuben Briggs Davenport. While arguing that Spiritualism did not stand or fall on the work of the Fox sisters, the writer thought that a true record would be of benefit.

When examining the importance of the Fox Sisters to the Spiritualist movement, there is little doubt that it was their work in the first three years that helped fuel the interest of many, as the reports of events in Rochester and then New York spread through the country. The interest taken in the girls by Horace Greeley, editor of the New York Tribune, meant that many people attended séances, including some in a position of influence, who left impressed by the information they had received. After the Fox sisters left New York, the New York Tribune of September 30, 1850 carried a report praising their “integrity and good faith”.

Although the Fox sisters were friendly with many who became the founders of the Spiritualist movement, Maggie and Kate largely remained distanced from the actual events that helped promote its development. Indeed, the personal circumstances of each of the sisters were to see them take very different pathways in life and would ultimately result in the breakdown of their relationship with the family, especially with their eldest sister Ann Leah, and with Spiritualism. 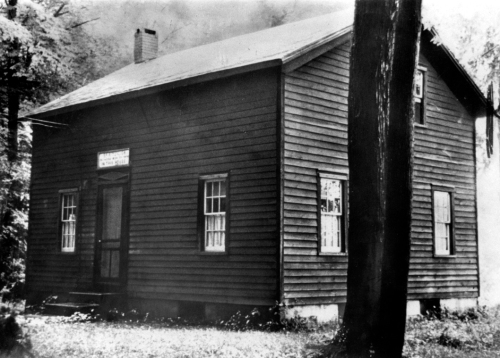 The famous Hydesville Cottage of the Fox Sisters

In 1849, Kate Fox spent time in the home of Eliab Wilkinson Capron in Auburn and did not take part in the first public demonstration of mediumship (with its subsequent investigation) at Rochester in November of that year. In 1851, Greeley persuaded the Foxes to let Kate go to school and gain a proper education. She spent some months at his residence, until the living conditions with Mrs Greeley became intolerable. On returning home Kate resumed holding séances and giving readings. Perhaps not surprisingly, given the way her life later developed, Kate was often described as a person who seldom embraced life joyously. As far as possible she worked away from her sister Ann Leah Fox.

Towards the end of 1852, Maggie Fox met Elisha Kane, an arctic explorer. He became enamoured with her, but not with Spiritualism – which he felt was an improper way of life. Throughout 1853 he worked to convince her that if she were to marry him she would need to give up the spirits and take up schooling. Finally, in the latter half of 1853, she stopped working as a medium and, moving away from her family, commenced a period of private schooling, arranged by Kane.

Maggie claimed that she and Elisha Kane were married in secret in October 1856. Despite moving back with her family while he was away on his travels, she honoured his wishes and did not return to spirit work. Sadly, 37-year-old Kane died in Havana on Feb 16, 1857. After his passing, Kane’s family refused to provide for Maggie, denying her alleged marriage to their son. Despite financial hardship, Maggie did not return to spirit work, but spent years fighting Kane’s family over money she believed he had intended her to receive. During this period, with its distress, bouts of anger and depression, Maggie began to suffer the effects of alcoholism, a problem that continued for the rest of her life. Kate, too, would soon suffer from the condition.

In November 1858, Ann Leah married the wealthy Spiritualist Daniel Underhill, entering a very different, more affluent lifestyle with many influential friends. This allowed her to remain more intimately involved with Spiritualism. Emma Hardinge Britten’s autobiography, published posthumously in 1900, highlights Ann Leah’s friendship with Robert Dale Owen and Emma. Indeed, this book states that it was at a séance with Ann Leah and Robert Dale Owen, around 1862, that Robert Owen came through to Emma, impressing her with the Ten Spiritual Laws and Ten Spiritual Commandments which were then included in the first Lyceum Manual.

In December 1864, friends of Maggie and Kate discovered the state of their dependence upon alcohol and it was arranged that the sisters go into the treatment centre of a George Taylor, the costs to be borne by Ann Leah and Daniel Underhill. However, the death of their father John Fox on Jan 5, 1865 delayed matters. Subsequently Kate agreed to go ahead with treatment, but Maggie refused.

On August 3, 1865 Mrs Fox passed away, leaving Maggie and Kate to grieve once again. Maggie, disillusioned with her continued mistreatment at the hands of Kane’s family, released The Love Life of Doctor Kane, a book based on his letters to her. If Maggie had hoped the book would end her financial worries she was sadly disappointed and was finally driven back to working as a medium. Throughout this period her relationship with Ann Leah continued to deteriorate. They were seldom on speaking terms, and the rift between them would ultimately prove permanent.

Despite receiving treatment, Kate was too easily drawn back to alcohol by her sister, so a subterfuge was worked out whereby she was invited to London. The trip proved successful and her mediumship moved to a new level, proving successful under strict test conditions, particularly for Sir William Crookes. On a personal level she also benefited, marrying the barrister Henry Jencken on December 14, 1872. Theirs was a very happy partnership which saw the birth of two children.

Sadly, on November 26,, 1881 Jencken died, leaving his affairs in a state that made it difficult for Kate. She finally managed to return to New York in 1885. Her arrival coincided with the release of Ann Leah’s book, The Missing Link in Spiritualism, which added to the disharmony between the sisters. Sadly, Kate’s return also saw a progressive relapse into alcoholism for both Maggie and Kate.

It is these disparate events that have led to a fractured account of the real history of the Fox family. Many accounts have softened the truth, others have changed it in various ways. Given the sad way in which the lives of Kate and Maggie played out, it is probably not surprising that their stories have been inadequately and inaccurately reported.

Particularly relevant was the way that Ann Leah Fox Underhill embellished her accounts of Spiritualism’s beginnings. We see this, both in her 1885 book and in the story she passed on to Dale Owen, recorded in Footfalls on the Boundary of Another World, published in 1860. In these books, the two young girls’ ages change, and it is Kate, not Maggie, who asks “Mr Split-foot” to “do as I do”. In Mrs Fox’s initial account of events recorded just four days after the fateful night communication with the spirit world began, and published a few weeks later by E. E. Lewis in the pamphlet A Report of the Mysterious Noises, Heard in the House of Mr. John D. Fox, no mention is made of Mr Split-foot. Mrs Fox’s elder daughter, Maggie, is described as having said “Do as I do”, and the girls are respectively described as being in their fifteenth year, and about twelve.

How and why the “Mr Split-foot” aspect of the story came to be incorporated into later records is still unclear. That the ages of the girls stated by Mrs Fox in her deposition to Lewis in April 1848 should subsequently become so uncertain, can, however, largely be attributed to the deliberate  obscuration of the truth on the part of Maggie, Kate and Ann Leah, though why they did so remains unclear.

The Lewis report is a collection of statements made by all adult members of the Fox family, and the various neighbours who had witnessed or been involved in communicating with the spirit of the pedlar in the Fox home in Hydesville. Reading through the statements gathered by Lewis, a lawyer and journalist, it is evident that the spirit world continued to communicate when Maggie and Kate were not present. This fact lends credence to the view the Fox sisters’ confessions were false, and that the origins of Spiritualism do not stand or fall by their actions at the time or subsequently. A copy of the Lewis Report can be found at http://www.woodlandway.org/PDF/Leslie_Price_PP12.pdf. Research into the ages of the Fox sisters at http://woodlandway.org/PDF/PP4.9September08.pdf.

As for Maggie and Kate’s confessions, we must remember that both sisters were in a sorry state at the time, short of money and drinking excessively again. It is almost certain that Maggie received money to confess. An Oct 12, 1888 Chicago Tribune article revealed Kate was furious with Ann Leah and her Spiritualist friends. She believed they had her two children taken away by the Society for the Prevention of Cruelty to Children, because her drinking made her incapable of looking after them. It is no wonder, therefore, that she then turned upon her perceived enemies.

Subsequently, Maggie recanted her confession. Indeed, when she died on March 9, 1893, the records show that raps were occurring all around her bedchamber. Kate had died on July 2, 1892. Largely shunned and ignored by the Spiritualist movement, their unhappy and troubled lives had finally come to an end.

Last but not least – on November 24, 1904 The New York Times reported the finding of a headless skeleton in the foundations of the Fox cottage, thus apparently corroborating the story of the rappings. However, the identity of the pedlar, what happened to his bones, and what else, if anything, was found to substantiate his existence, is another story.

9 responses to “The unhappy mediums”